Don't be fooled by the name!  We're not just Scottish, not just in San Francisco, and we play much more than just fiddles.

Our repertoire, though steeped in the Scottish tradition, includes material both old and new from the Scottish mainland and the Shetland Islands, as well as Scotland's neighbors. From the south come influences not only of the rest of the British Isles, but also from the Celtic regions of Galicia in Spain and Brittany in France. From the east, across the North Sea, Scandinavian melodies and rhythms flow into the gathering musical tide, and as it sweeps across the Atlantic and North America, the Cape Breton Islanders and the Quebecois add their voices.

Our activities cover a large area of Northern California, from Santa Rosa to Monterey and from the coast to the Sierra foothills, with occasional ventures out into other regions of the US and beyond.

Our members include world-class professional musicians and rank beginners of all ages. Some have grown up in the world of traditional music, some have come from the world of classical music to find an entirely new facet of the joy of musical expression, and some have come from no musical background whatsoever and discovered a love of music that they never knew they were missing.

We play fiddles, cellos, guitars, mandolins, harps, flutes, whistles, drums, and even the occasional bagpipe. Whatever the path, whatever the instrument, and whatever the level of technical accomplishment, we draw nourishment from the communal act of making music together, and we delight in sharing that nourishment with the world.

The San Francisco Scottish Fiddlers formed in 1983 when small group of Bay Area friends, led by acclaimed Scottish Fiddler Alasdair Fraser, gathered to play traditional and modern Scottish tunes together. As we attracted others into our circle, we decided to share our music in public concerts. These have grown into a regional Annual Spring Concert Series that brings their joyful enthusiasm to three different venues in the greater Bay Area in one weekend.

As we got a bit older and had kids who learned to play, we formed an inter-generational performing group that makes no distinctions by age or status as a professional or amateur.

As our circles grew ever wider, we naturally incorporated the music of American roots and those of international influences as well. Several of the kids who grew up in the group have been inspired to become professional musicians.

Current members are a mix of amateurs and professionals of all ages. Our one musical imperative, regardless of the tune or tradition, is never to be boring. We accomplish this without auditions or competition. We are an inclusive community that focuses on the joy of making music together.

Throughout the year, smaller groups of SFSF musicians can be heard at Farmers' Markets, Celtic and contra-dances, Highland games, and other events all over the greater San Francisco Bay Area. See our Events Calendar  for more information. To inquire about having SFSF musicians perform at your event, email info@sfscottishfiddlers.org.

The SFSF were featured in an award-winning documentary, The Groove Is Not Trivial, about Alasdair Fraser, our founder and music director. The film premiered at the 2016 Mill Valley Film Festival and won the Audience Choice Award.

To learn more about the San Francisco Scottish Fiddlers, go to: sfscottishfiddlers.org

Here are some clips from our 2014 Northern California tour. 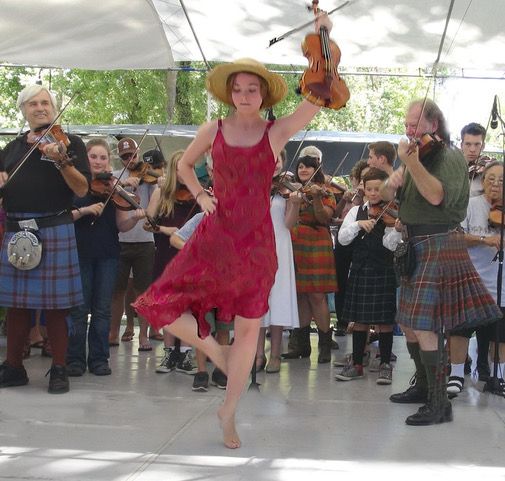 Tunes From Past Concerts